During the last weeks I was busy getting an overview on the data. Being kind of a graphic nerd, I wanted to create not only functional but also aesthetic outputs. While ggplot2 certainly has it´s quirks, it was fun to puzzle out charts that worked for me. Here come the first resulta.

The basis of the data collection was a list of the 2653 politicians who were either members of the 18th German Bundestag or running as candidates for the 19th election period starting in 2017. Since the parties are free to nominate as many candidates as they like this distribution hardly reassembles the voting share of any election. The politicians are divided among the parties as follows: 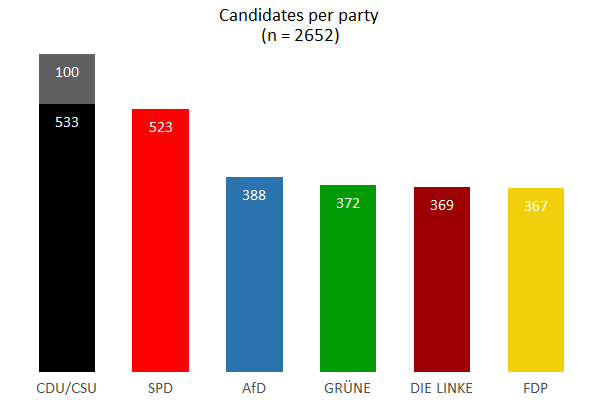 As stated in a previous post, naturally not all politicians maintain Facebook profiles, nor are their profiles necessarily public and available for download. The final sample of politicians is shown below: 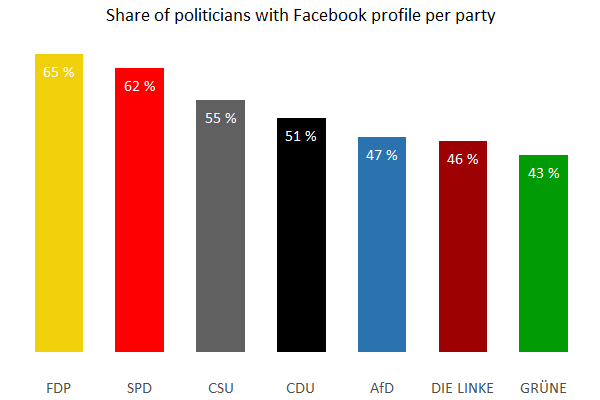 Clearly, the politicians of some parties are much more involved in Facebook campaigning than others. For instance, nearly as many SPD politicians as CDU/CSU politicians have a public profile although there were fewer names on the list. Further, the FDP politicians seem to be quite present on the platform, while politicians of the Grüne are not so well represented in the Facebook sample- To get this insight more comparable, the following chart presents the ratio of politicians with Facebook profile per party. 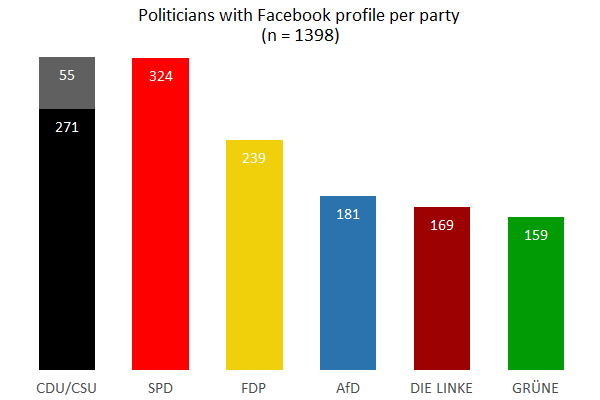 The chart makes it clear that the FDP politicians maintain a profile above all others (65 percent). Looking at individual FDP profiles I think one can identify that the FDP social media team provided unitary visual material that was distributed vastly among the candidates. In addition to the likewise strong pretence of the SPD on Facebook, it may come as a surprise, that the AfD candidates are not so strongly represented.  Eventually, the party’s success was partly attributed to its successful presence in the social networks. At the level of individual politicians, however, there no particular quantity can be found.  What is also surprising is the present of the Greens in the sample below average. Although the party appeals to a rather young target group and the Green parliamentarians are also younger than their colleagues from other parties, the Greens have the fewest Facebook profiles, both in terms of absolute and relative share.

Well, although these findings reveal interesting background knowledge, they parties are not the main objective of the current study, which is concerned with strategic communication of single politicians. On politician level I first analyzed popularity in terms of fan count. Unsurprisingly, current chancellor Angela Merkel leads the Top10 with great distance more than 2.5 million fans. Second is not her main contender Martin Schulz (SPD) but former opposition leader Gregor Gysi (Die Linke). Both candidates pair close to 0.5 million fans and are followed by the current parliamentary party leader of Die Linke, Sarah Wagenknecht (0.4 million fans). The leading candidate of the FDP, Christian Lindner cannot contend with these numbers. At least he has 0.2 million fans. On rank 6 Frauke Petry follows, the former party spokeswoman of the AfD who left the party right after the election. Because she was still am member for the main part of the enquiry period, I will keep her as an AfD member. Next, on rank 7 is the first leading politician of the Greens, Cem Özdemir (0.1 million fans). This completes all the factions now represented in the Bundestag. On rank 8 to 10 more leading candidates from AfD (Alice Weidel), CDU (Jens Span) and SPD (Sigmar Gabriel) follow. From 10th place in this ranking, the number of fans drops below the mark of 100000.

The next step will be to analyze the > 710,000 posts which were collected in regard to the buzz they created as well as their textual as well as visual aspects. I already calculated some results but I´m still searching for a good way to present them online. This is difficult because so many pictures are involved…

Dissertation are quite a project🎓: Through years of intensive work on a problem, dissertations significantly expand the knowledge in our field. The #dgpuk22 therefore devotes two tracks to ongoing and completed dissertation projects.
DGPuK members check it out. Deadline: 15.10.! https://twitter.com/Dgpuk2022/status/1447156032556371969